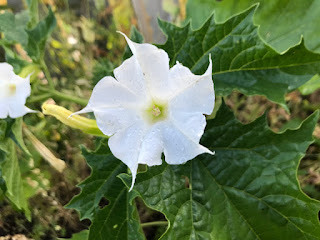 White bryony flower In this series we are looking at plants which were used as anaesthetics in ancient Roman and medieval times and in wartime Britain.    In my last three posts in March, June and September, I described the progress of several such plants including henbane, jimsonweed/thornapple, white bryony/English mandrake, mediterranean/european mandrake, opium poppy, hemlock/poison hemlock, monkshood/wolfsbane and deadly nightshade.    It’s now December, the garden is dormant so let’s take a look at how one might use these plants in practice. First the usual warning: DON’T TRY THIS AT HOME.   These plants can be highly toxic or even fatal.   The purpose of this series is to imagine what we might have to do if we were thrown into some national emergency, the usual supply lines for the import of pharmaceuticals broke down, and we had to make do with whatever was at hand – just like people did in wartime Britain.   These are not recreational drugs and nobody should attempt to use the
Post a Comment
Read more 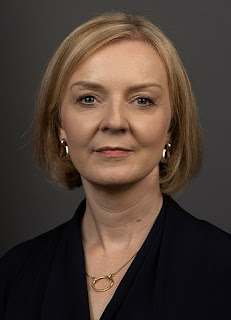 Liz Truss, ex-Prime Minister of UK For anyone who has not been following the horror show of British politics in the last few weeks, here is a brief summary: Liz Truss was elected Prime Minister on 6 September 2022 following the resignation of her predecessor. She appointed Kwasi Kwarteng as her Chancellor, who announced a “mini-budget” on 23 September. This contained £45 billion in unfunded tax cuts including the abolition of the 45% higher rate of income tax and the scrapping of the limit on bankers' bonuses – both unpopular measures which were widely seen as benefiting the rich at the expense of the poor. Following the mini-budget, the financial markets tanked, interest rates rose, sterling fell to its lowest ever level against the US dollar and turmoil in government bond prices led the Bank of England to launch an emergency bond buying programme. This caused house mortgage lenders to withdraw over 40% of their products, with other products repriced upwards. The package was crit
3 comments
Read more 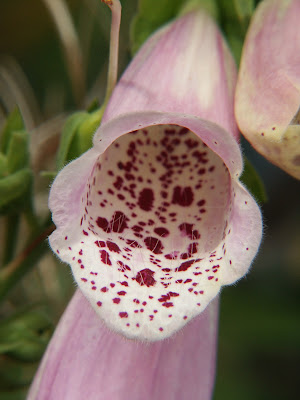 Foxglove In this series we are looking at plants which were used as anaesthetics in ancient Roman and medieval times and in wartime Britain.   In my last two posts in March and June, I described the progress of several such plants including henbane, jimsonweed / thornapple, white bryony / English mandrake, mediterranean / european mandrake, opium poppy, hemlock / poison hemlock, monkshood / wolfsbane and deadly nightshade.   It’s now September, so let’s take a look at how these plants have got on in the last three months. Henbane seed capsules Henbane (Hyoscyamus niger) This annual plant has completed its life cycle by setting seed.   When the seed capsules dry out and turn brown they develop a ring of sharp spikes to deter predators, which makes harvesting the seeds rather painful at times!   The capsule is sealed with a cap; when the plant is ready to release its seeds the cap falls out and the seeds are scattered. These plants only grew to about a foot tall, their maximum height und
Post a Comment
Read more 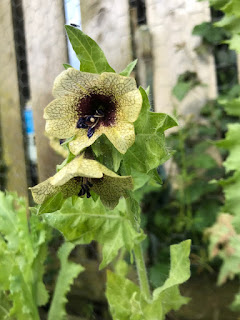 In my last post in March, I described how Britain circumvented the German blockades in World Wars 1 and 2 by growing, or foraging, plant-based vital medications, and I showed how to start growing some of those plants.   We are now going to revisit the plants and see how they have got on in the last three months. Henbane (Hyoscyamus niger) This grows well in the Isle of Man climate and as you can see, this specimen has already started to flower.   The plants are still small (about 9 inches) but should reach a height of around three feet before setting seed. Jimsonweed / Thornapple ( Datura stramonium ) A plant of the sub-tropics, Jimsonweed can be an aggressive invasive weed in warm climates but is difficult to grow in cooler climates like the Isle of Man.   This is the third year I have tried to cultivate it   here.   My last two attempts were unsuccessful, but this plant is doing well.   I learned from my previous failures that Jimsonweed needs room temperature (around 20 degrees Cels
2 comments
Read more
More posts